Babies February 27, 2020 by Lisa Duvall
Note: Always consult with a medical professional prior to making decisions on behalf of your child or if you are pregnant. This article is not medical advice. Raising Them is ad supported and may earn money from clicks.

Note: This is not medical advice. Always consult your doctor.

Are you sick and tired of dealing with nosebleeds during pregnancy?

No one likes to deal with nosebleeds, especially during pregnancy. They start all of a sudden and anywhere that you are; nosebleeds don’t care!

If you aren’t prone to nosebleeds when you aren’t pregnant, you might be worried that the sudden starting is abnormal or harmful to you or your baby. It’s normal to have questions, so let’s look at what you need to know!

What Causes Nosebleeds During Pregnancy? 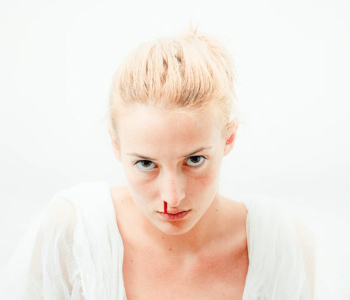 When you’re pregnant, all of the hormones can make the blood vessels inside of your nose to expand. The pregnancy hormones estrogen and progesterone are to thank for the increased blood flow to your body’s mucous membranes.

Typically, those swollen mucous membranes lead to a stuffy nose, but then you’ll end up blowing and sneezing more often as well. Combined with your increased blood pressure, these vessels receive more pressure placed on them, causing them to rupture.

Typically, these nosebleeds are minor and harmless. Having a few throughout your pregnancy isn’t a cause for alarm or worries.

You’re more likely to have a nosebleed if you already have a cold, sinus infection, or allergies. If the membranes of your nose dry out, such as during cold weather, airline cabins, or air-conditioned rooms, the risk increases as well.

Another potential cause of nosebleeds is that you could be dehydrated. Pregnant women need to drink more water, typically 10 cups or MORE per day. If your body is dehydrated, it can cause your mucous membranes to dry up and crack, leading to bleeding.

How Common Are Nosebleeds During Pregnancy?

If you have nosebleeds, you’re in good company. Around 20% of pregnant women report having them rather than 6% of non-pregnant women.

When Do Nosebleeds Typically Start During Pregnancy?

Not only are nosebleeds normal during pregnancy, but you might also notice stuffiness and congestion. Congestion often leads to more nosebleeds because you end up blowing your nose so often.

Typically, the nosebleeds and congestions start around the 16th week of your pregnancy and stick around until the very end. That’s a bummer for sure, but you aren’t contagious to the people around you. Remember, it’s all hormone related!

How to Stop a Nosebleed

Everyone should know how to stop a nosebleed! Here are the steps; it’s quite simple.

Make sure that you DON’T lie down or tilt your head back. It might seem like a good idea to tilt your head back, and you probably watched it in a movie. However, doing so leads to your swallowing blood, which could cause nausea or vomiting. You might even inhale blood.

It would help if you also didn’t put wads of tissue up your nose. That can be tempting, but it backs up the blood flow, sending it into your throat.

How to Prevent Nosebleeds in Pregnancy

No one wants to get nosebleeds, but sometimes they’re inevitable. However, there are some things that you can do to help prevent them during nosebleeds.

Not only do you need to drink plenty of fluids during pregnancy for your health, but you also need to drink them to help your mucous membranes stay well-hydrated.

Whatever you do, make sure you DON’T blow your nose too hard. Blowing too hard can cause a nosebleed. You also can try a lubricant to prevent any dryness in your nose, such as petroleum jelly or saline nasal sprays.

Did you know there is a proper way to blow your nose?

You use your thumb to close one of your nostrils, and gently blow out the other side. Then, repeat with the other nostril until you finally can breathe again. Be sure to use soft tissues to prevent chafing.

Keep Your Mouth Open When Sneezing

This might seem strange, but you should keep your mouth open when you sneeze. Doing so distributes the pressure of the sneeze instead of placing it all inside of your nose. That pressure can cause blood vessels to burst.

It’s safe to take an extra 250mg of vitamin C during pregnancy, along with your regular daily intake. Some studies suggest that doing so increases the strength of your capillaries, reducing the risk of nosebleeds.

If you don’t want to take supplements, drink a daily glass of orange juice and vitamin C rich foods, such as bell peppers, kiwis, and tomatoes.

Remember that dry air can cause a nosebleed, so using a humidifier adds moisture back into the air, especially during the winter or when you live in a dry climate. It would be best if you also tried to avoid overheating your bedroom or being near irritants, such as smoke.

You want to make sure that you buy a warm-mist humidifier rather than a cold-mist one. Also, don’t run it all the time, but do keep it close when you’re sleeping.

Should I Seek Medical Care for Nosebleeds?

If you have frequent nosebleeds during pregnancy, you might want to contact your doctor. She can try tests to rule out the possibility of any bigger problems.

Rarely but sometimes, a nosebleed could require immediate medical attention. If that’s the case, call 911 or have someone drive you to the emergency room. Examples of these cases include:

The good thing about nosebleeds during pregnancy is that they’re rarely a severe issue. Typically, the problem disappears after you have your baby, which is great because no one wants to deal with nosebleeds and a newborn baby.

Disclosure: Raising Them is a member of the Amazon Affiliate Program. We may earn compensation from clicks to Amazon and other websites.

I have two kids and I'm pregnant with a third. I have written these guides to help you find discover the best parenting tips and products out there.